From the Archives: College Bowl, 1965
by Marlene Lopes

The Congressional Record of July 12, 1968 paid tribute to a long running television program, “a marvelous and productive partnership of industry, the arts, scholarship, and competition.”  That program was the General Electric College Bowl, a weekly contest of knowledge and quick recall, between two teams of college students.    On May 30, 1965 Rhode Island College took up the challenge. 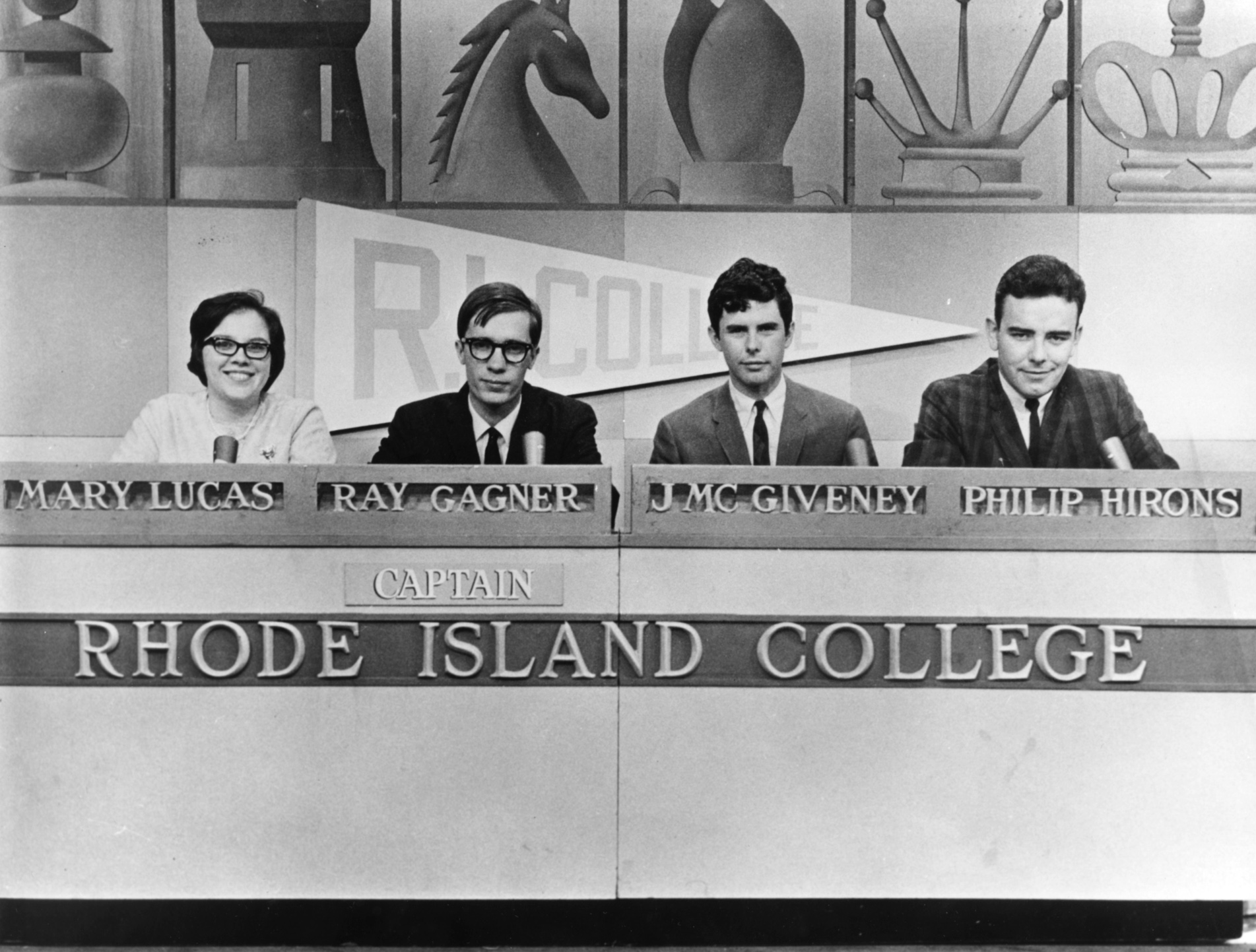 January – When the invitation from General Electric arrived Rhode Island College accepted without hesitation.  As directed in the accompanying information packet, the Public Relations Office began an intensive campaign to publicize the event and to attract participants.   Tapping into the latest technology, its Director requested that the College’s   “IBM apparatus” be employed to help uncover the best candidates, “Reasonably soon, can you give us lists of students who achieved College Board scores of 625 or above in their verbal and/or math tests?”

February -- Along with the rules of the game, sample questions, and helpful hints, the College Bowl booklet laid out the logistics of staying in New York and appearing on national television.  Its sponsor, GE, would cover the expenses of travel, 2 nights at the Savoy Plaza Hotel, meals, and taxis for the team members and coach.  Each would also receive a complimentary theatre ticket for Saturday night and a GE appliance of choice.  Upon seeing the wiring diagram for a buzzer (to be recreated at RIC), Director Blissland mused, “Possibly somebody in Industrial Technology can be called in if we run into snags.”

Meanwhile, letters were sent requesting tips from veteran New England teams.   Although most respondents emphasized the importance of subject specialty cramming, quick reaction, and buzzer practice, Amherst College wrote, “The less said about our participation the better.  … We gave it little thought, treated it in an off-hand manner and got creamed.”

Dean (later President) Willard sent letters urging students to take on the challenge for the fun of it, the PR Office asked faculty for recommendations, and the Anchor echoed the calls.  On February 23, 252 students took the preliminary written test.

March -- Two exams followed in which the remaining 39 students had to supply written answers to oral questions, “the toughest, meanest, most ridiculous questions conceived by the mind of man.”  The 16 survivors were divided into four teams, Mixmaster College, Steamiron School of Design, Vacuum Cleaner University, and Toaster Tech.  As they competed in a mock College Bowl on March 30, students, faculty, and administrators rated each contestant for aggressiveness, speed, knowledge, and poise.

April / May -- Coached by history instructor, Ara E. Dostourian, the 8 finalists studied their manuals, took a speed reading course, and watched videos of College Bowls.  Each day they worked together for one hour and did private preparation on their own.  One finalist, disqualified by program officials because of her age (40), became a coach.  On May 19 the dream team lineup was announced:  Raymond L. Gagner, Philip G. Hirons, Mary M. Lucas, and Angela Jean Pantalena.   Shannan E. Fleming,  John  J. McGiveney,  and John L. Symynkywicz were alternates.

On May 27 in RIC’s TV studio, the final rehearsal pitted the team against four members of the faculty, one of whom, Professor C.  Annette Ducey, had represented Goucher College on a winning team.  After an official send-off, the RIC team left for New York, where they had one free day before the show.  Rehearsals, with and without cameras, took place all day Sunday in order to familiarize the players with the NBC studio.   At 5:30 it was show time, live and “in living color.”

Especially strong in history, though somewhat weak in the sciences, the Rhode Island College team did well.  At half-time its one-minute video about the College concluded with its narrator, standing in front of Adams Library, declaring, “People are the key to Rhode Island College, where the most important things are the teacher who wants to teach and the student who wants to learn.”

At the end came victory, along with a $1,500 scholarship.  In the words of the Providence Journal, “An aggressive team of four students … swamped their opponents [Washington State] 185 to 100.”  Referencing the earlier unsuccessful attempts of URI and Brown, the Pawtucket Times declared, “Little Rhode Island College showed its more illustrious collegiate big brothers in this state how it’s done ….”