Web sites – there will ALWAYS be more.  These should be consulted in conjunction with any separate website list from your professor:

The Internet Archive, a non-profit organization working with cooperating research partners such as NSF, Sloan Foundation, Library of Congress, and The ARChive of Contemporary Music (among others), is building a library of Internet sites and other cultural artifacts made public in digital form.   "Like any general library, some of this material is priceless primary sources and others are entertainment, fiction or trivia."   An example of a wonderful new "find" is a small trove of World War I films newly discovered at the National Archives after having been mislabeled as WW 2 films for almost 100 years!  These have now been posted to the Internet Archive.

Use this strategy to tease out primary sources on World War I (notice that Internet Archive DOES use metadata - information which describes the major features of something - including some Library of Congress Subject Headings).  REMEMBER: in order to be considered a primary source, the item must have been created during the time period of The Great War, with a little wiggle room if origins or aftermath are taken into consideration.  DATE LIMITS are essential. 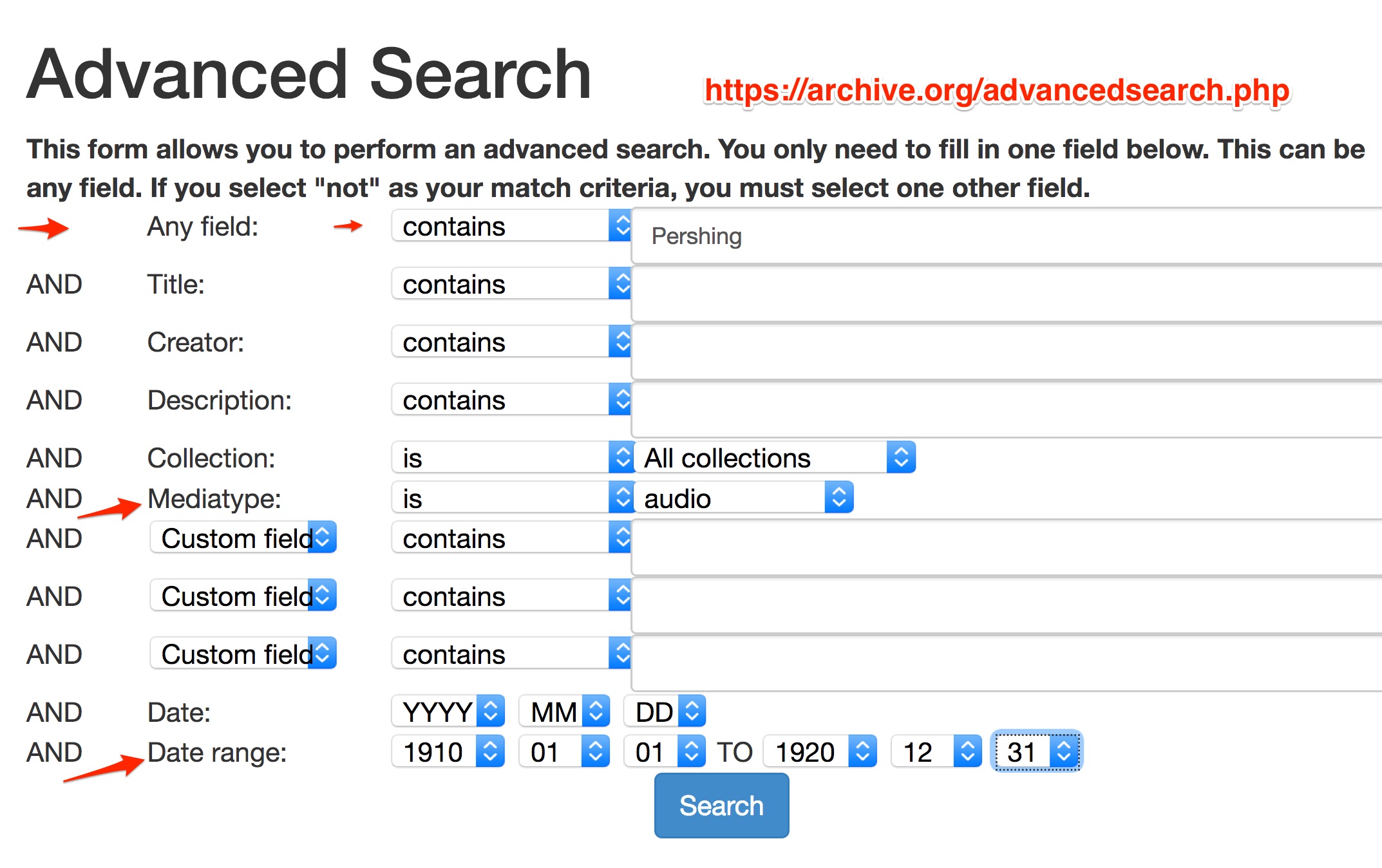 This series includes a guide on America at War with a rich section on World War I, including participation of women, WWI Centennial special materials, and personal narratives from the American History Project.

Documents, photographs and other materials from the Imperial War Museum and other collections throughout Europe and Australia are being added as the centenary approaches

"...each and every one of the 8 million who served during WW1 deserves to be remembered....not as a monument to military glory, but as a record of the toil and sacrifice of those who had served in uniform or worked on the home front.  The vision for this record was that it would be so complete that every individual, man or woman, soldier, sailor, airman and civilian from across Britain and the Commonwealth would find a record of their contribution."

Selected materials from the IWM collections on WWI have already been digitized.

Not as well documented as one might like, but very rich: consider American Memory, ARTstor, and other sources giving provenance first.

Includes over 3000 newsreels, military footage, shorts and theatrical films from the war period as well as later documentaries which use footage from WWI. See also their TOPIC list for collections of films, i.e. Ottoman Front, Children, Prisoners of War, etc.

​""During World War I, the impact of the poster as a means of communication was greater than at any other time during history. The ability of posters to inspire, inform, and persuade combined with vibrant design trends in many of the participating countries to produce thousands of interesting visual works. The Library of Congress Prints & Photographs Division makes available online approximately 1,900 posters created between 1914 and 1920. Most relate directly to the war, but some German posters date from the post-war period and illustrate events such as the rise of Bolshevism and Communism, the 1919 General Assembly election and various plebiscites.

The majority of the posters were printed in the United States. Posters from Australia, Austria, Belgium, Canada, Germany, Great Britain, Italy, the Netherlands, and Russia are included as well. The posters range in style from anonymous broadsides (predominantly text) to graphically vibrant works by well-known designers. The Library acquired these posters through gift, purchase, and exchange or transfer from other government institutions, and continues to add to the collection."

The Guide to the Collection includes a list of posters grouped by category, for example: South American posters, 1914-1918 or Financial Aid: War Savings Stamps, 1914-1918.

A search for "world war I" brings up a number of items about the "war work" of libraries and other organizations on the home front.

One of the largest collections of documents related to World War I in the world.  Some materials have been digitized, especially for exhibit purposes, for example: Sharply Drawn: the Political Cartoons of Louis Raemaekers: 1914-1941 [RIC holds the 3-volume work Raemaekers' cartoon history of the war, compiled by J. Murray Allison; call number =  D526.2 .R37 ]

"The Great War Archive contains over 6,500 items contributed by the general public between March and June 2008. Every item originates from, or relates to, someone's experience of the First World War, either abroad or at home. Contributions were received via a special website and also through a series of open days at libraries and museums throughout the country." Those contributions were checked and edited by project staff.  Subsequent contributions have come directly from the public using project webforms on the archive site that were developed by staff.  This site links directly to the The First World War Poetry Digital Archive. NOTE: despite the opening header, the search box on the left is set to The Great War Archive.

"The First World War Poetry Digital Archive is an online repository of over 7000 items of text, images, audio, and video for teaching, learning, and research."  Note particularly the Education area which contains much of the video material.

Created by the Department of Veterans' Affairs, government of Australia

Note that most of these primary sources are not translated.  However, some translated documents ( and not all are primary sources) are linked, for example the Documents of World War I collection at Mount Holyoke College which is listed on several of the country-specific lists.

Over 1500 institutions have contributed to Europeana.  The original source of the material is always shown so you can be sure of its authenticity.  This site can be frustrating at times especially for media which are described but not fully digitized.

The most important pan-European collection of original First World War source material. It is the result of three years of work by 20 European countries and will include:

Originally, Europeana 1914-1918 was based on an initiative at the University of Oxford where people across Britain were asked to bring family letters, photographs and keepsakes from the War to be digitised. The success of the idea – which became the Great War Archive (see above in this list) – has encouraged Europeana to bring the German National Library into an alliance with Oxford University to roll out the scheme in Germany. The collaboration will bring German stories online alongside their British counterparts in a 1914-18 archive.  At present (2012), the German material resides at Europeana, the Great War Archive (British) materials reside at Oxford University, and they must be searched separately.