This course emphasizes the reading and writing of film criticism. This guide focuses on tools and techniques that aid your discovery and incorporation of the literature of film criticism, both popular and scholarly, into your work for this course. Subjects: Film Studies Tags: Film Musicals, Movie Musicals

And then there's IMDb...

The Internet Movie Database (IMDb) is over 25 years old and, as a general commercial website, was not originally conceived as serving an academic audience.  However,  their editorial oversight functions at a relatively high level (see the discussion of verification by checking of film prints the inclusion of uncredited acting in a cast list -- "Can I be listed in the database?")  for some indication of the seriousness with which the editors take the provision of accurate information. 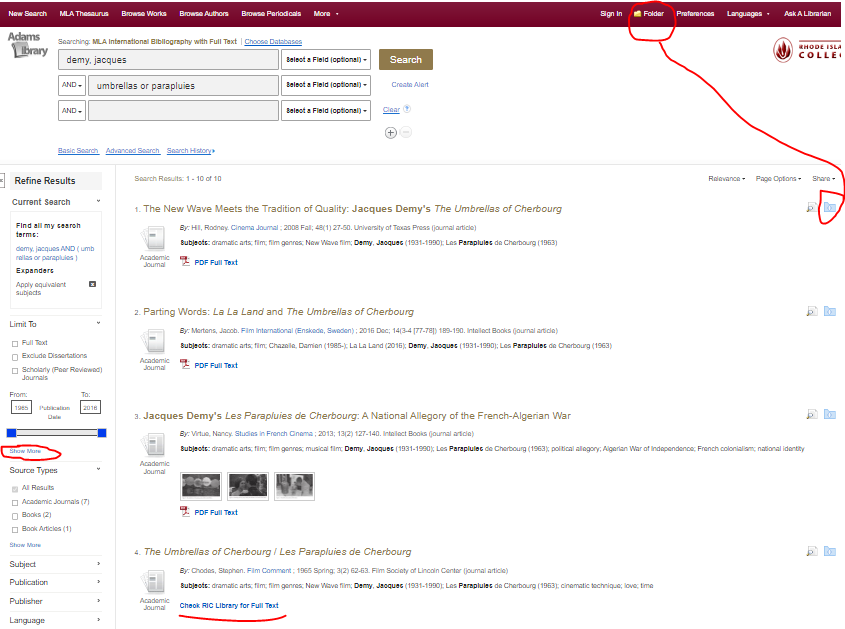 Note the FOLDER feature at right for keeping track of citations and any fulltext articles which are licensed to appear inside the database.  Do not ignore the items marked "Check the RIC Library."  Because Adams Library subscribes to more than 125 online databases, the journal you need could be licensed to another of our databases, for example result #4 above : the 'checking' link is the way to find out!

New York Times - Historical (1851-within 5 years of the present)

The New York Times is justly famous for its critical reviews of film, theater, music, art, and culture in general.  It is unique in our collection in the range of years which it covers which include the period of the invention and first commercialization of motion pictures.

Once limited to a range of dates (from release through subsequent awards periods = about two years), our search strategy should not only include the title of the film "Moulin Rouge" but also the name of the director, Luhrmann, since we would like to discover to what extent the general press viewed him as an auteur or the singular creator of his films. 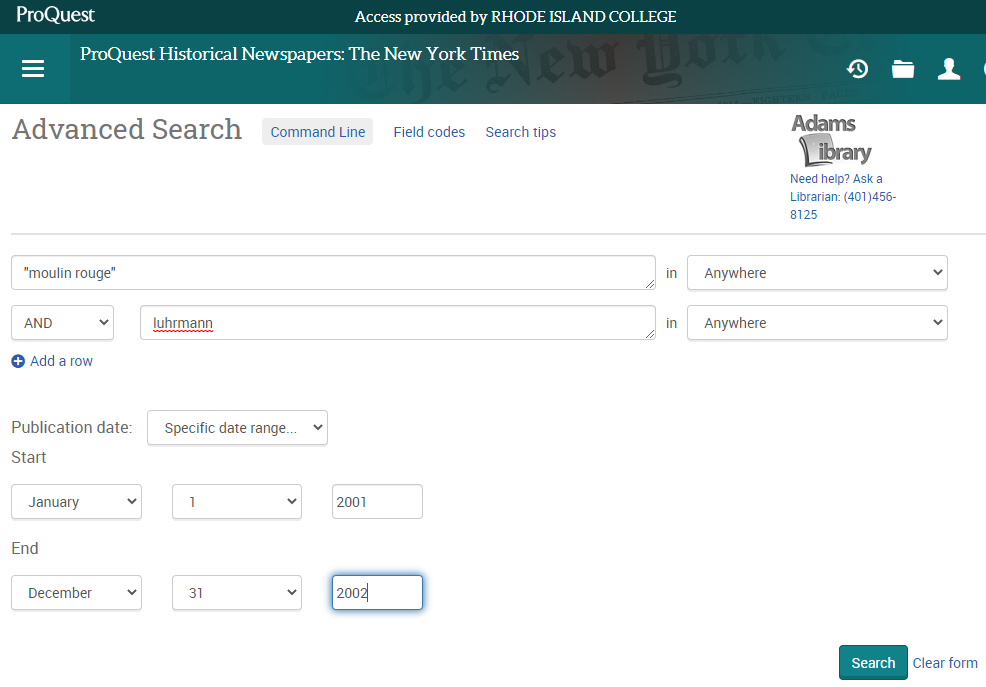 Small to medium-sized newspapers like the Providence Journal fill a large percentage of each issue with content they PURCHASE: from the Associated Press, from agencies that trade in syndicated columinsts' work, from other papers like the New York Times News Service.  This file indexes ONLY locally written articles and those for which the ProJo owns the copyright.  For example, Roger Ebert's essays as film critic for the Chicago Sun Times was syndicated (licensed on an annual basis) to over 200 newspapers in the United States, but is not indexed in the ProJo file.