This course emphasizes the reading and writing of film criticism. This guide focuses on tools and techniques that aid your discovery and incorporation of the literature of film criticism, both popular and scholarly, into your work for this course. Subjects: Film Studies Tags: Film Criticism

And then there's IMDb...

The Internet Movie Database (IMDb) is 30 years old in 2020 and, as a general commercial website, was not originally conceived as serving an academic audience.  However,  their editorial oversight functions at a relatively high level (see the discussion of verification by checking of film prints the inclusion of uncredited acting in a cast list -- "I worked on a title but did not receive a screen credit. Can it be listed on IMDb?")  for some indication of the seriousness with which the editors take the provision of accurate information.

Is it science fiction or COMPLETE fiction?

One of the perennial favorite pastimes of science fiction fans is critiquing the science behind the fiction.  Is it logical?  Could it exist even if not in existence now?  This site - Insultingly Stupid Movie Physics - analyzes the physics of sci-fi films.

Common weekly news magazines with "arts" columns as well as general interest monthly magazines (Nation, NewYorker, etc.) are indexed in this retrospective tool.  Use this to get more depth of coverage for any films released before 1984.  RGPL-RETRO is a periodical INDEX, not a full-text database.  So be sure to use the "Check the RIC Library" links to locate relevant articles in our collections. 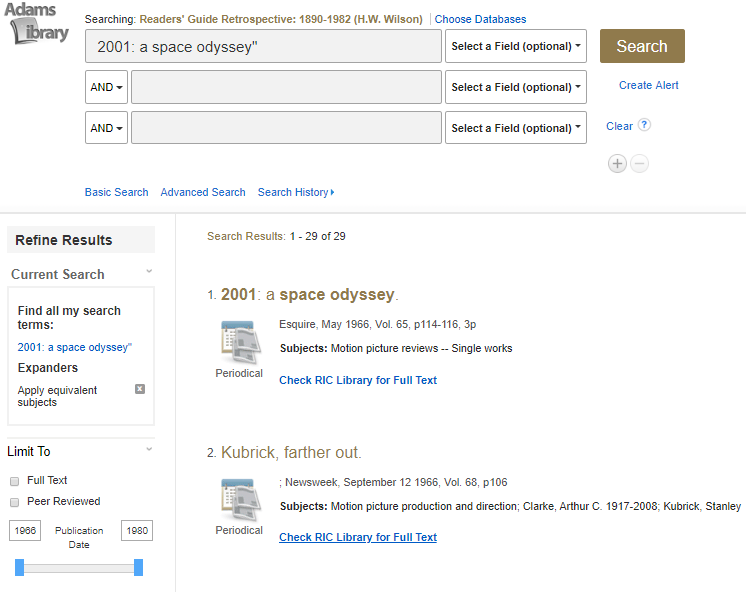 Once you've searched for the film title [TIP: use "2001 a space odyssey" , the complete title.  As you can surmise, using just 2001 will bring lots of irrelevant "noise" into the results.  However, using 2001 AND Kubrick will yield a somewhat different set of results from the example here. The dates of coverage of Reader's Guide RETRO means you will not get any references to the remake of the film..  You can use the Sort menu on the right to arrange your results from the earliest (oldest) coverage forward.

Academic Search Complete - is a general periodical index that includes news and general culture magazines, trade publications, and academic journals.  However, the strength of its coverage extends from the mid-1980s to the present.  As you can see, the results for 2001: a space odyssey do not extend back to the release date of the film (1968).. 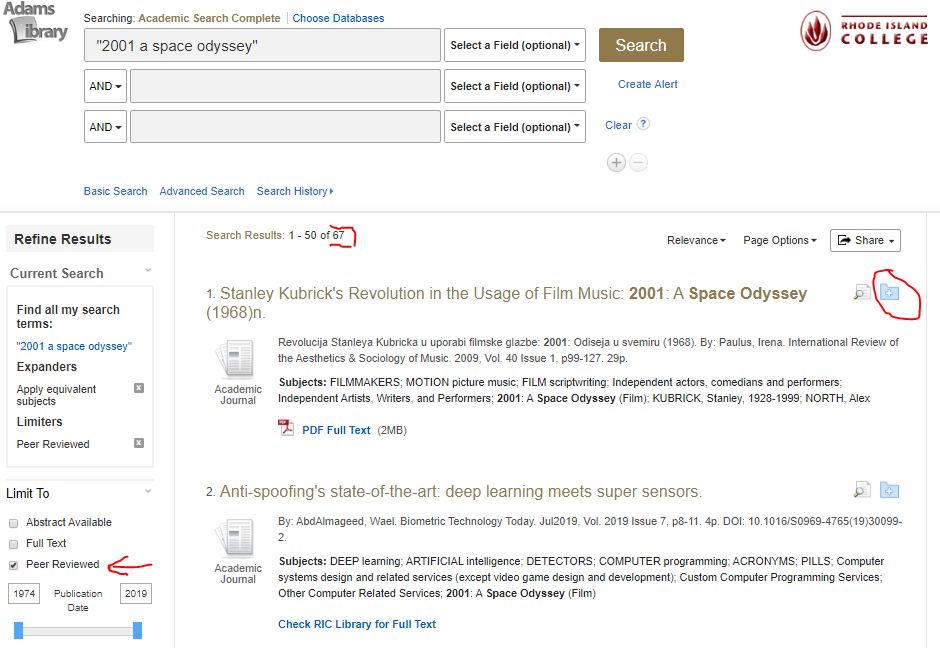 The New York Times is justly famous for its critical reviews of film, theater, music, art, and culture in general.  It is unique in our collection in the range of years which it covers which include the period of the invention and first commercialization of motion pictures.

Because this is a daily newspaper and the database contains complete fulltext of the articles, pay attention to the histogram in the left-hand frame that displays number of articles by decade.  This screen shot shows the decade 1980 - 1989 already chosen as a focus.  If you choose to limit by date initially consider a range such as from release through subsequent awards periods -- at least one full year.  Your search strategy should not only include the title of the film "E.T." but you should consider including the name of the director, Spielberg, since we would like to discover to what extent the general press viewed him as an auteur or the singular creator of his films. 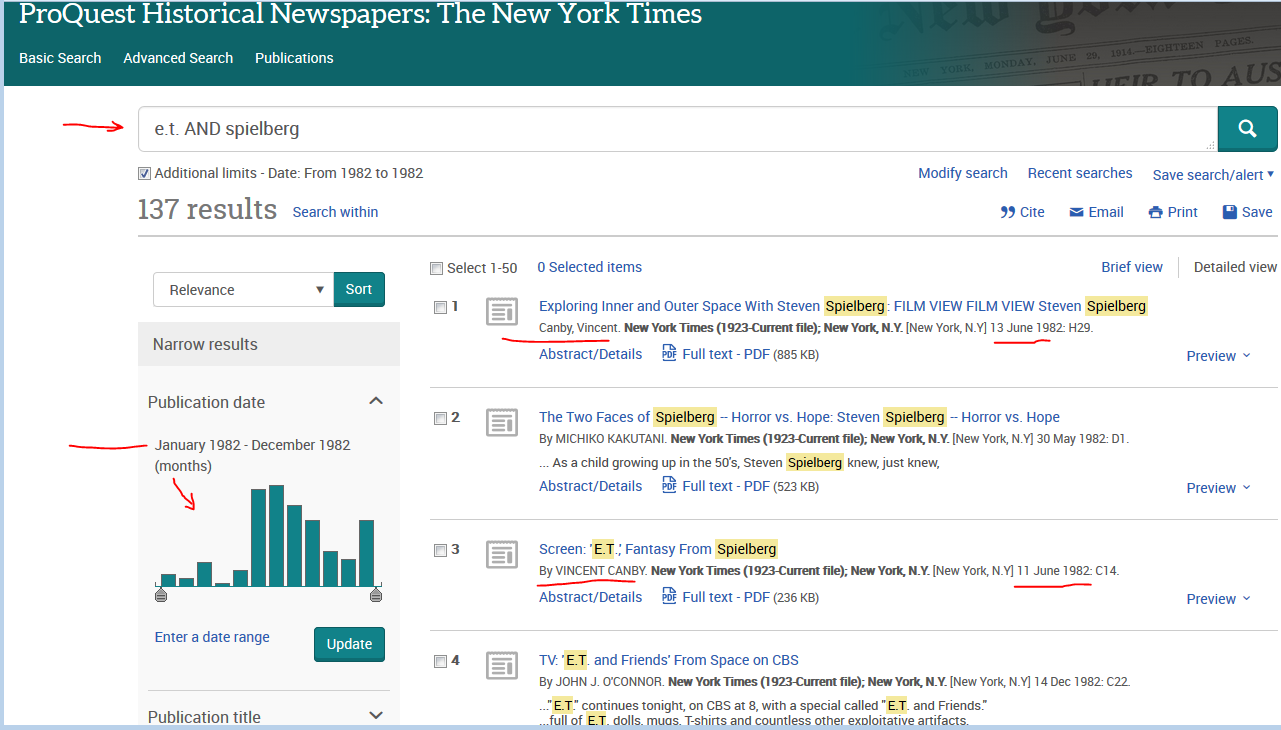 Small to medium-sized newspapers like the Providence Journal fill a large percentage of each issue with content they PURCHASE: from the Associated Press, from agencies that trade in syndicated columnists' work, from other papers like the New York Times News Service.  This file indexes ONLY locally written articles and those for which the ProJo owns the copyright.  For example, the locally written reviews by Michael Janusonis (ProJo film reviewer) will appear but Roger Ebert's essays as film critic for the Chicago Sun Times which were syndicated (licensed on an annual basis) to over 200 newspapers in the United States, are not indexed in the ProJo file.

Be sure to choose 1982 from the list of years on the initial search screen to restrict your search to initial release reviews.  Also, consider using E.T. AND Spielberg as the search terms.

Lexis/Nexis Academic indexes more newspapers than any other database in the Adams Library collection, but its user interface is somewhat unusual.  It will help you to focus your search if you use the Advanced Options dropdown and make sure only Newspapers as a category of publication is 'checked' and that you specify a range of dates: for instance the year of release or the year a film was re-released or remade as a starting limit. 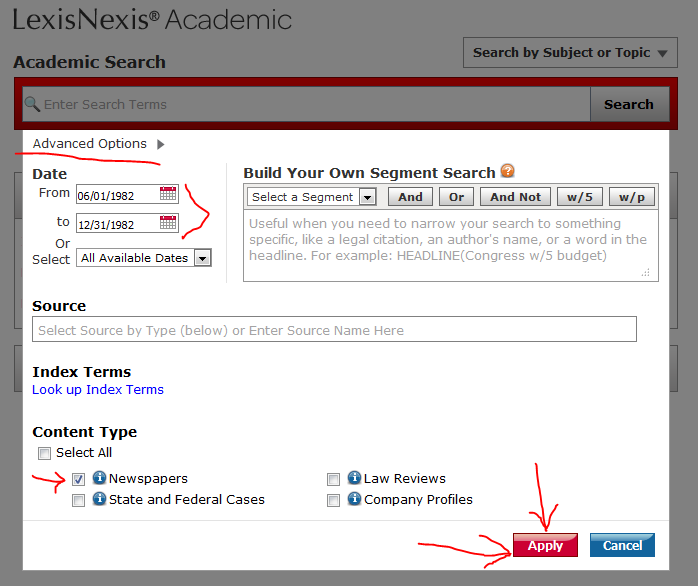 Once you have your criteria set, hit the APPLY button and use the main search box to enter your search terms.  Although setting a date range should ensure that the results are focused on a particular period, remember - some reviewers will use the 'short' title for a film like E.T., not its full title.  This will muddy the results so consider adding the name of the director to your search.