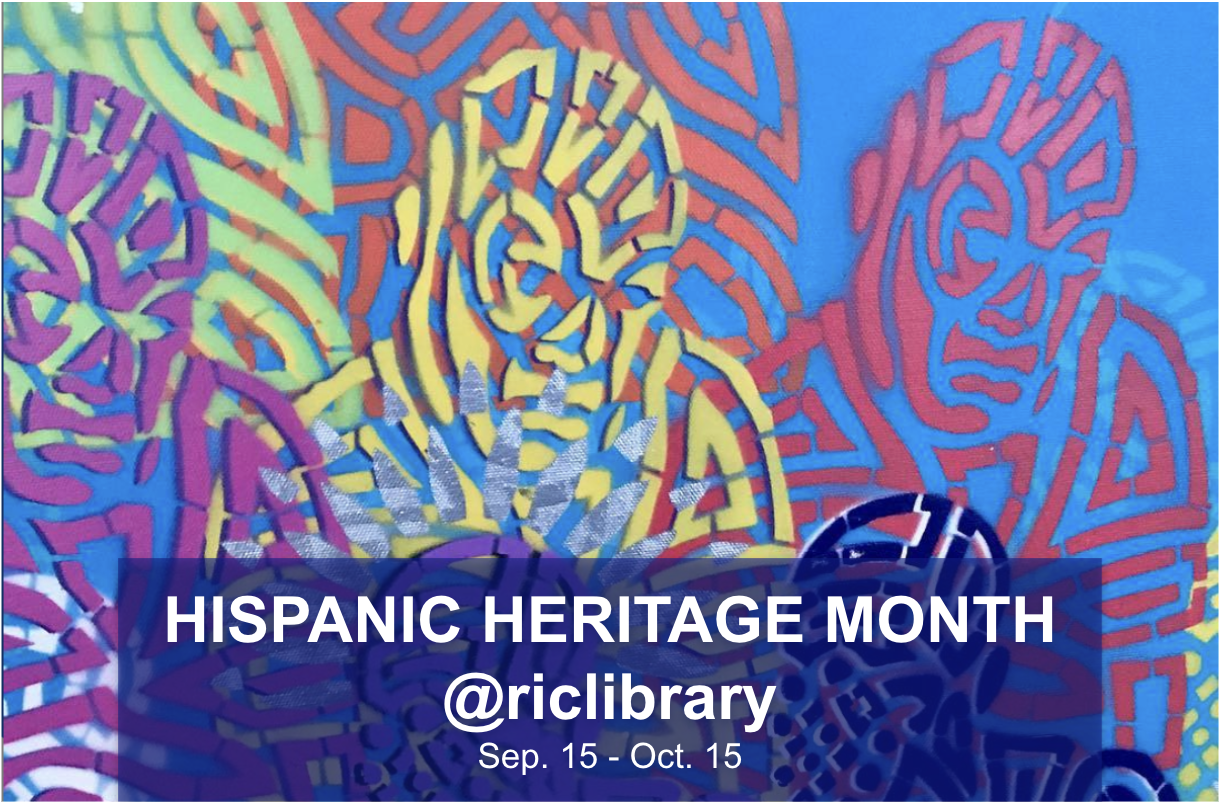 Celebrated between September 15 and October 15, National Hispanic Heritage Month honors the cultures and histories of people in the US who came from or whose ancestors came from the Caribbean, Mexico, Central America, South America, and Spain. The observation began in 1968 under President Lyndon Johnson as Hispanic Heritage Week, and was later expanded by President Ronald Reagan. September 15 is significant because it marks the anniversary of independence for Costa Rica, El Salvador, Guatemala, Honduras, and Nicaragua. Mexico and Chile celebrate their independence days on September 16 and September 18 respectively.

Did you know that more than 25% of Rhode Island College students self-identify as Latinx or Hispanic? The College recently received federal recognition as a Hispanic Serving Institution (HSI). We're the first public four-year institution in Rhode Island and the New England region to receive the designation.

Starting on September 15, 2021, the Adams Library will be using its social media and website to share curated lists of relevant digital scholarship, data resources, arts and culture collections, and streaming media. We hope that these resources will be explored, considered, and enjoyed by all members of the RIC community.

To help make this resource guide inclusive of gender, sexuality, ethnicity, and language, we have used terms from the National Association of Hispanic Journalists Cultural Competence Handbook. As explained in the Handbook:

Latino/Latina/Latinx/Hispanic are often used as “umbrella terms” describing people who are either themselves or their ancestors are from a Spanish speaking country. While the terms are sometimes used interchangeably, in reality “Hispanic” only refers to persons of Spanish-speaking origin or ancestry, while “Latino” is accurate to refer to anyone of Latin American origin or ancestry. Note: Latino applies to men, boys and mixed-gender groups (i.e. Latino community); Latina applies to women and girls.

While it may be accurate to describe a person with either term “Hispanic” or “Latino”, it does not make the terms interchangeable, because they mean two separate things. When reporting, be mindful that some prefer to identify themselves as Hispanic, while others call themselves Latino or choose to be identified specifically by their country of origin.

NAHJ recommends asking the person or group how they want to be identified.

Latinx is a gender-neutral term sometimes used in lieu of Latino or Latina for people of Latin American heritage. For those who identify with two or more Latin American cultural or racial identities, Latinx is a term that is all-inclusive.

In the Adams Library, we also recognize there are other terms that folx prefer.

Office of Diversity, Equity, and Inclusion

The Library kindly thanks the RIC Office of Diversity, Equity, and Inclusion (ODEI) for its support during Hispanic Heritage Month. First, we are indebted to ODEI for its generous provision of Spanish-language translations of the Library's English-language social media content. Second, members of ODEI thoughtfully reviewed and suggested useful improvements to this guide. Third, we appreciate ODEI's inclusive and energetic approach to coordinating the many exciting events that the College has planned for Hispanic Heritage Month.

The mission of ODEI is to promote active and ongoing processes that advance social and racial justice and equity college-wide. This team provides leadership to identify, assess, and eliminate institutional inequalities in areas related to race, ethnicity, sexual orientation, gender expression or identity, religion, social class, language, disability, socio-economic status, national origin, citizenship status, age, and veteran status. Their commitment is to promote campus climate that is diverse, supportive, welcoming and safe for all.

Resources for Hispanic Heritage Month @riclibrary were curated by Amy Barlow (Associate Professor and Reference Librarian) on behalf of the Adams Library Outreach Committee. The descriptions of resources included in this guide were generally sourced from publishers and institutional websites. Questions? Contact Amy Barlow at abarlow@ric.edu.