Art in the Library

The James P. Adams Library has several original works of art on permanent exhibit. This guide is intended to showcase the library's art collection and the artists whose works are on display.

"Cosmic Pollock", installed on February 7, 2004 in the library lobby, was painted by James Montford's Art 201-01 class, Visual Arts in Society.

Every student in the class participated in the creation of this piece. 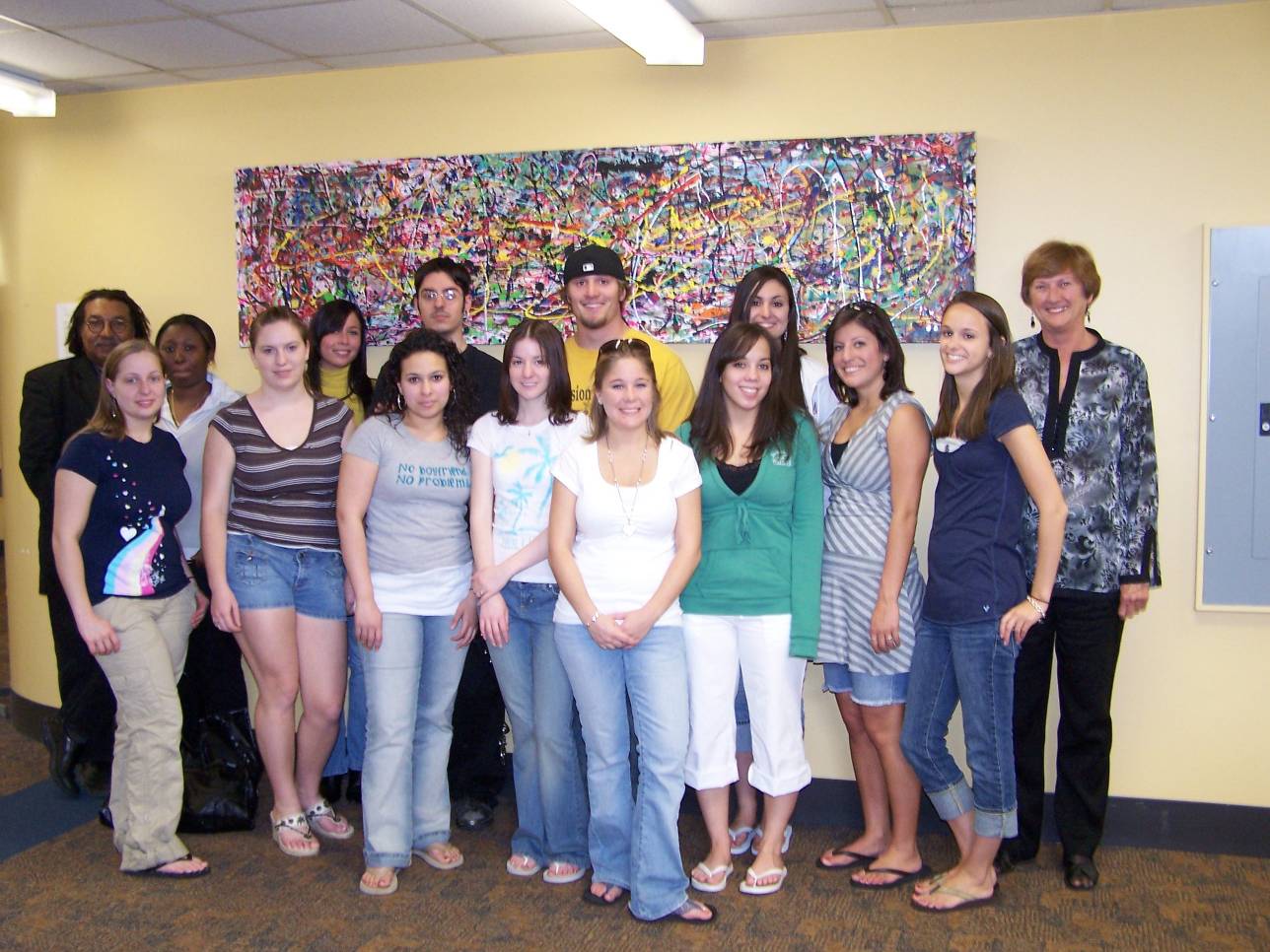 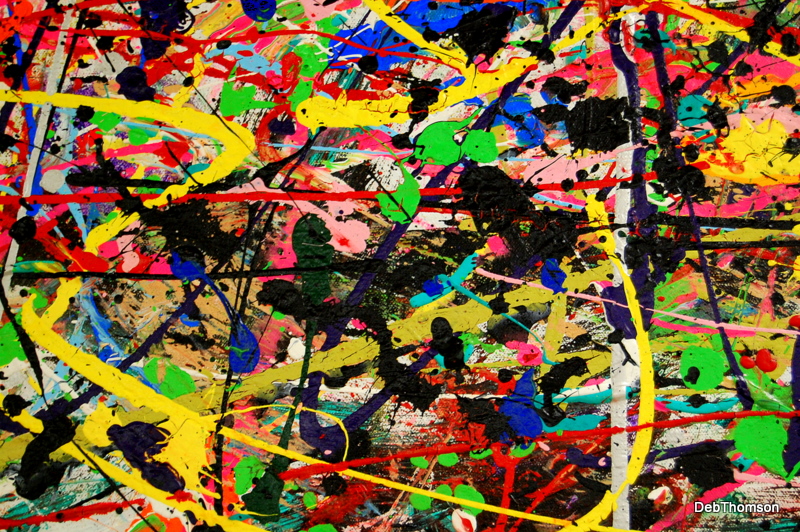 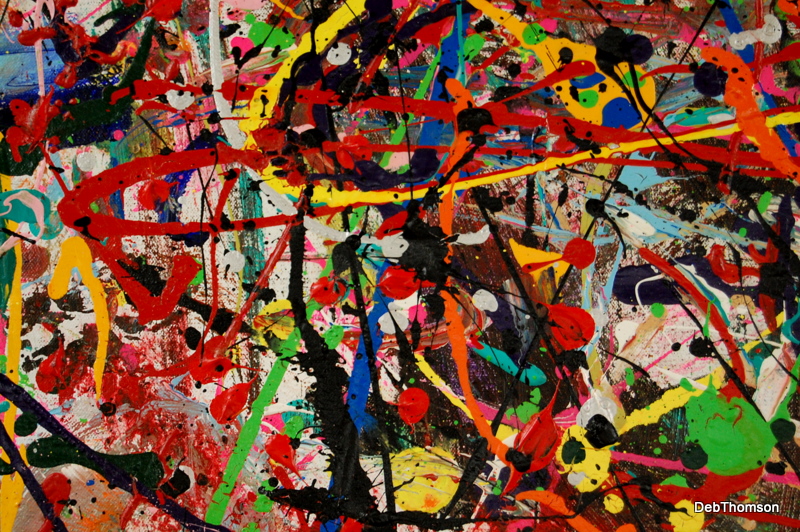 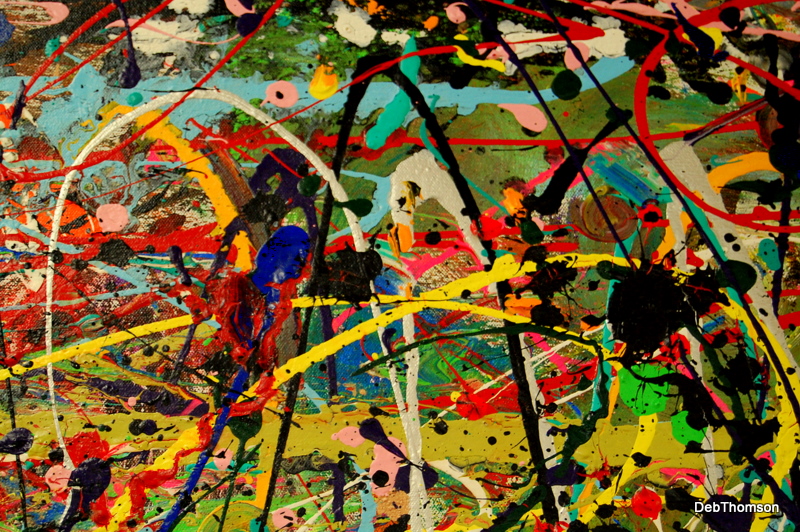 "It doesn't make much difference how the paint is put on as long as something has been said.  Technique is just a means of arriving at a statement."  Jackson Pollock

"This painting had a little bit of everyone's personality in it.  It was nice to know information about the artist and be able to try and recreate what he made."  Shana Walsh

"When we went to the RISD Museum and saw the Jackson Pollock painting I was almost disgusted to know how much money people would spend on it.  However, after doing our 'Cosmic Pollock' I have begun to understand where the talent comes into play."  Joseph Manley

"After doing the Pollock painting hands on, I realized that a person doesn't necessarily need to know exactly what they are doing to create something.  Our class didn't really have an idea of how to start, but as long as we had some direction, we learned through trial and error what looked good and didn't look good.  We saw what patterns looked bad, and what colors and shapes do look and work well together.  It's ok to make mistakes because you learn better that way.  I believe our painting came out successful because we had an open mind throughout the whole process, and doing it hands-on is how we learned to create our fine piece of art."   Celeste T Le

"To the naked eye some of Jackson Pollock's paintings almost seemed as though they were put together randomly.  However, if a person were to bring themselves closer to the painting they would notice that everything was placed with the utmost care and every mark had some thought behind it.  There are also many different layers and textures that bring the entire piece together which is what makes them beautiful and unique."   Alicia Lardaro

"At first I thought Jackson Pollock's work was a 'happy accident'.  I thought, 'Wow I did something like that when I was a kid, I could be famous'. Then when we actually made our own, I was amazed at the time and effort that has to be put in to create good art.  We had levels in our painting and it was carefully planned out...in my head anyway.  In the end it came out great, and I now have a better idea as to how Pollock made his fabulous paintings."   Nancy Isidoro

"Jackson Pollock's art work was more than just scribbled lines of paint, it was different and unusual.  Pollock stepped outside the box and introduced society to another form of art that is interestingly unique."   Ashley Repoza

"Making a painting that was similar to Jackson Pollock's made me understand how there are rules to art and there are things that do and don't work in paintings.  Also, I thought it was pretty interesting how the painting 'worked' at times and at other times didn't, but in the end all came together.  I think it's similar to how Pollock felt at times in his life about his own paintings."   Kerri Rogers

"After taking Visual Arts in Society with James Montford and discussing Pollock and his life, and the period in history in which he was so prominent, I now understand more about the man behind the painting.  This project gave us the chance to experience a short, perhaps abridged version of the same processes that Pollock used in creating his masterpieces.  I hope viewers can appreciate this painting for the variety and interaction of colors and marks, as well as the heart that was put into creating it."   Jonathan Rosa

"We made something out of nothing and had a good time doing it.  That's what art is all about."   Kerri Benyon

"This project has opened my eyes to what I am capable of when it comes to art.  Not being an art major this really scared me at first but as it went along it became so much fun.  We just splattered the paint on the canvas with no plans of where it would go or look like.  Pollock's paintings were so impressive and to think that we made a painting that captures what Pollock was doing is inspiring."   Jenn Belisle

"Being able to take part in painting our very own piece of artwork based on Jackson Pollock's way of painting was a spectacular experience and not to mention fun.  Seeing our class interact as a whole and taking each other's thoughts and suggestions into consideration was a huge part of making the painting what it has become.  We were not afraid to step out of the box or our comfort zone, we went all out, and the end result turned out to be a pretty incredible piece of art work."   Cathy Clapprood