This guide was created in commemoration of Italian American History Month, to accompany a library exhibit honoring the contributions of the late Carmela E. Santoro, professor of History and Secondary Education at Rhode Island College

Library materials in this exhibit were purchased using the

From the Main Collection

An Italian-American Odyssey: Life line – filo della vita: Through Ellis Island and Beyond, by B. Amore

Are Italians White?: How race is made in America, edited by Jennifer Guglielmo & Salvatore Salerno

Feeling Italian: The art of ethnicity in America, by Thomas J. Ferraro

The Italians (Coming to America Series) edited by C.J. Shane

‘Merica: A conference on the culture and literature of Italians in North America, edited by Aldo Bove and Giuseppe Massara

Only in America: From immigrant to CEO, by Paul Oreffice

The Journey of the Italians in America, by Vincenza Scarpaci

Courage of Innocence: A saga of Italian immigrants in the American frontier, by Ann Federici-Martin

From The Margin: Writings in Italian Americana, edited by Anthony Julian Tamburri, Paolo A. Giordano and Fred L. Gardaphe

The Milk of Almonds: Italian American women writers on food and culture, edited by Louise DeSalvo and Edvige Giunta

From the Young Adult and Curriculum Resources Collections

Hope In My Heart: Sofia’s Immigrant Diary Book One, by Kathryn Lasky

The King of Mulberry Street, by Donna Jo Napoli

Professor of History and Secondary Education

Professor Carmela Santoro taught history and secondary education at RIC from 1960 until her retirement in 1983.

She received her Ed. B. from Rhode Island College in 1937, her M.A. in history from Brown University in 1944 and her Ph.D from Syracuse University in 1967, after which she was promoted to the rank of Professor.

Professor Santoro served as the Director of the Ethnic Heritage Studies Project at RIC during the 1980’s.

Upon her retirement, she was named Professor Emerita of History and Secondary Education.

After her retirement, she authored “The Italians in Rhode Island: the Age of Exploration to the Present, 1524 – 1989” published by the Rhode Island Publications Society in 1990.

was established in 1984 by the friends and colleagues of Dr. Carmela Santoro on the occasion of her retirement as a professor of history at Rhode Island College.  The purpose of the fund is to support the purchase of Italian-American materials for the James P. Adams Library. 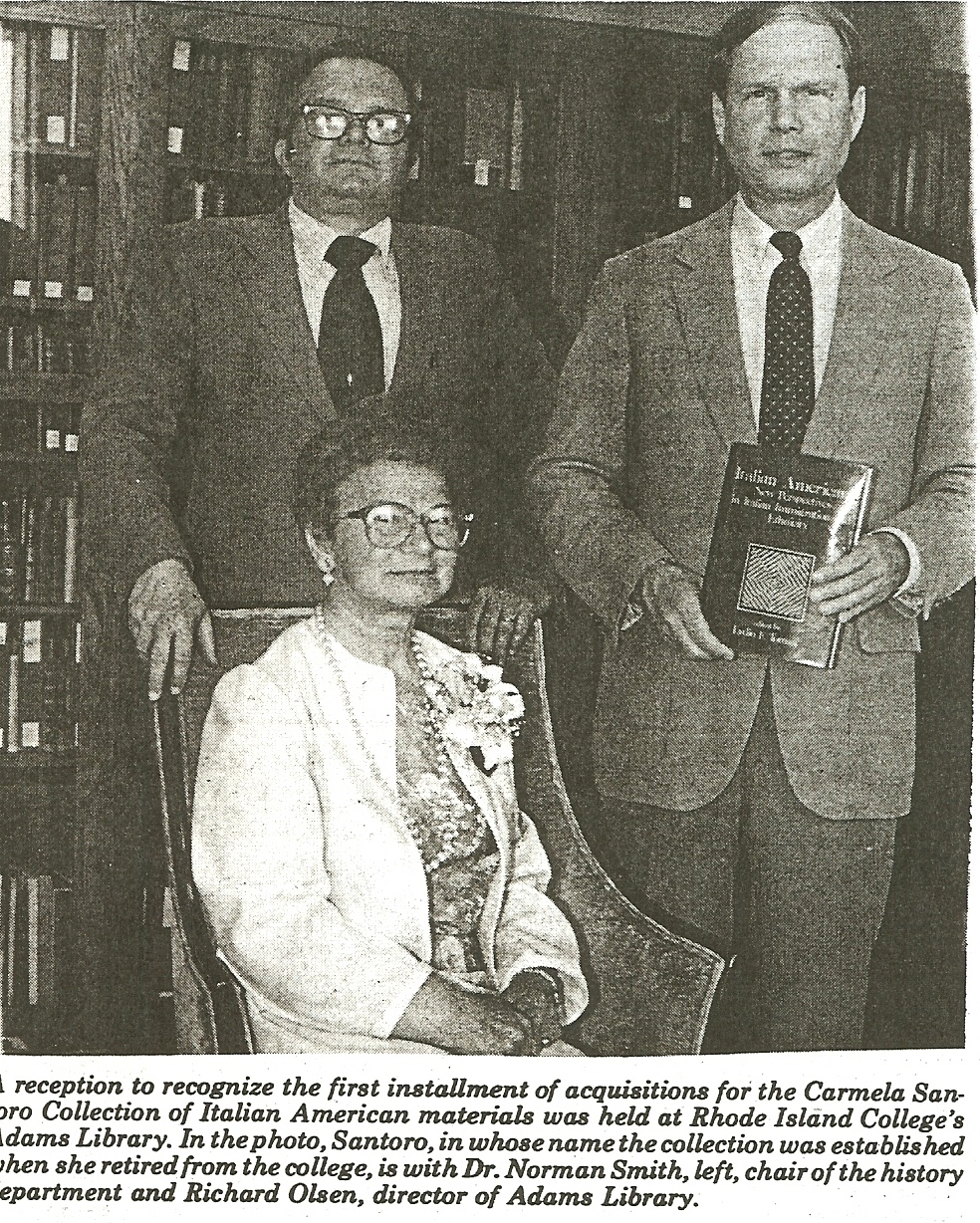 This exhibit includes just a few of the hundreds of items that have been purchased with the Carmela Santoro Fund.