The narrator of the book purports to be Arthur Gordon Pym himself, and when he reaches the end of Episode 12, where a chasm appears and in the doorway a shrouded human figure arose, he leaves off the narrative. A most unsatisfactory note follows --

The circumstances connected with the late sudden and distressing death of Mr. Pym are already well known to the public through the medium of the daily press. It is feared that the few remaining chapters which were to have completed his narrative, and which were retained by him, while the above were in type, for the purpose of revision, have been irrecoverably lost through the accident by which he perished himself. This, however, may prove not to be the case, and the papers, if ultimately found, will be given to the public.

Although the note goes on to discuss details of the Narrative, the reader is left with an unresolved mystery, so it is no surprise other authors have taken up Pym's adventure each in their own style.

azimuth - a term used in navigation for the bearing of a celestial body. Geometrically it is the measure of the arc of the horizon that lies between the elevated pole (north in the northern hemisphere, south in the southern) and the point where the great circle passing through the celestial body cuts the horizon.

phantom islands - islands that were believed to exist, and appeared on maps for a period of time (sometimes centuries) during recorded history, but were later removed after they were proved to be nonexistent.

There arose in our pathway ... 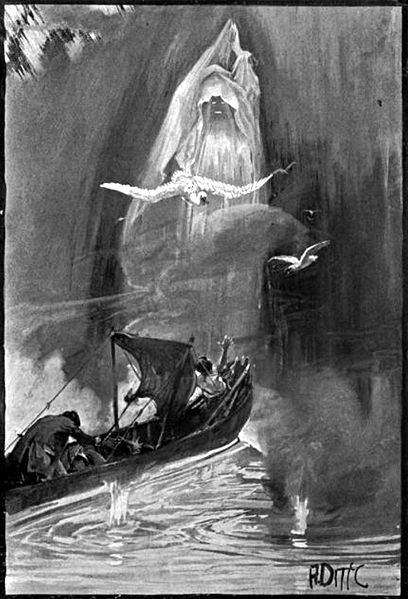 Illustration: "There arose in our pathway a shrouded human figure", 1898 illustration by A. D. McCormick

In the Narrative of Arthur Gordon Pym, the chasm encountered at the southernmost point of the journey conforms to Symmes' Hollow Earth Theory which posited a hollow planet with holes at the poles. In 1818, John Cleves Symmes proposed an American expedition to explore the Earth's interior. Symmes is suspected to be the real author of Symzonia; Voyage of Discovery by Captain Adam Seaborn. New York: J. Seymour, 1820. 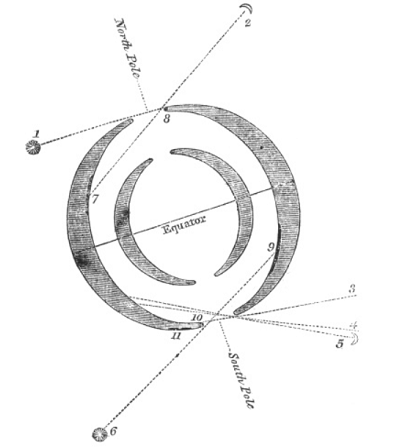 In this essay, the author recounts the story of Symm's theory and traces its influence on the establishment of a wholly American scientific enterprise and american literature and fringe culture -- Griffin, Duane A. "Hollow and Habitable Within: Symmes's Theory of Earth's Internal Structure and Polar Geography," Physical Geography: 25, no.5 (2004) p.382-387.