n. A person whose ancestry is one-eighth Black.

[octo- + (quad)roon.]
Usage Note: The terms mulatto, quadroon, and octoroon originated with the racial policies of European colonizers in the Americas, especially the Spanish. Because civil rights and responsibilities were based directly on the degree of European blood that a person had, such classifications were highly elaborated, and minor distinctions in ancestry were carefully recorded. While these terms have highly precise definitions, in actual practice they were often used based on impressions of skin color rather than definite knowledge of ancestry.
Free Dictionary -- http://www.thefreedictionary.com/octoroon

Searching for Black Utopia ... in Antarctica

An Interview with Mat Johnson 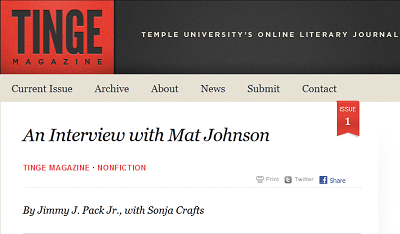 "Johnson often describes himself as an “Octoroon” or a “Mulatto,” despite the terms’ seeming lack of political correctness. He grew up near Valley Green, a section of Wissahickon Valley Park, in the Germantown and Mt. Airy sections of Philadelphia. “I used to identify as an African American,” he says, “and then in the 1990’s the ‘proper’ word was ‘interracial,’ but that can refer to anyone of any two different races. Just to mess with people, it’s more fun to use a term like Mulatto because it gives the sense of another race, which is what I am.”