"...I want to know if it is any way you can oblige me by helping me to get out there as I am anxious to leave here and every thing so hard here..." "... I am a young man in need of a position because I have a family to support and I can't get nothing to do to support them I have been out of a job for five months or more..."

The Library of Congress' Chronicling America collection of  American Historic Newspapers is a rich source for news reports and other primary documents ( photos, editorials, Letters to the Editor, etc)  from around the U.S.

In The Washington Times, a front page headline from October 26, 1916 reads “South Unable to Put Stop to Negro Exodus” denoting the waves of African American families moving out of Southern states. The full article highlights the role of labor agents, as well as some of the difficulties faced by African Americans seeking to move. A few years later, the front page of the October 9, 1920 issue of the African American newspaper, The Kansas City [MO] Sun ran two stories dedicated to the migration of African Americans from the South to Northern and Western states, particularly California. The full articles offer a snapshot view of conditions impacting migrants in one northern city, offering details of a labor meeting, opportunities offered by immigration restrictions, and an appeal from presidential candidate Warren G. Harding to secure the black vote. (NOTE: To read full article, click on the picture.) 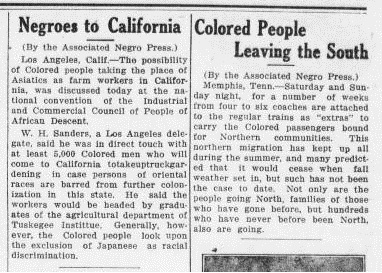 On February 3, 1917, the front page of The Denver Star published 2 articles, side by side, on the increase of cars sold to African Americans and on the causes and effects of black migration. Both articles, however, go into detail about current conditions of African Americans and the reasons why they wanted to leave the South. As one of the articles notes, "the condition of the Negroes on the farm, while vastly better than it was years ago, is still little better than slavery. They are massed on large plantations and practically compelled to stay on the land."

The headline, "Increasing says the Census Bureau" is from the front page of The Lakeland Evening Telegram. Published on December 17, 1921, the full article is about the increase in the number of African Americans living in norther cities who were born in Southern states. (NOTE: To read full article, click on the picture.) 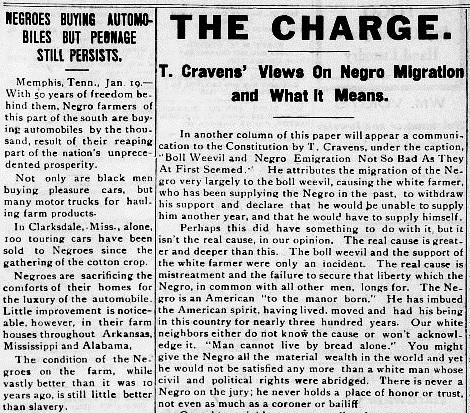 Letter to the Editor of the Providence Journal Sunday October 31, 1920  (if off  campus  enter RIC Username and Password) 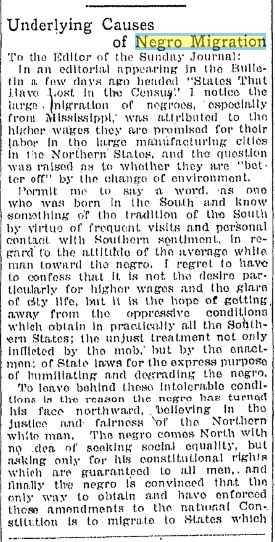 ...do not discriminate against any group on account of its color or creed.