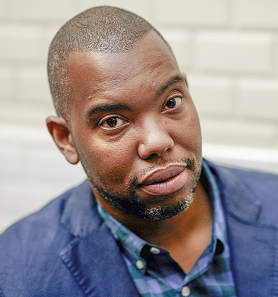 On Police Brutality, The Confederate Flag And Forgiveness

Ta-Nehisi Coates was a MacArthur “Genius Grant” fellow, has received the National Magazine Award, the Hillman Prize for Opinion and Analysis Journalism, and the George Polk Award for his Atlantic cover story “The Case for Reparations.” His first book, The Beautiful Struggle (2009) is a memoir of his youth. Between the World and Me (2015) won the National Book Award and other other awards and became a bestseller, adding celebrity to Coates' life. In 2015, he accepted an invitation from Marvel Comics to script an 11-issue series of Black Panther. (The Black Panther character when debuted in an issue of Fantastic Four, in 1966, was the first black superhero in mainstream American comics.) Coates' next book, We Were Eight Years in Power (2017) is an annotated collection of new and previously published essays on the Obama era. Until 2018, he was a national correspondent for The Atlantic where he wrote about culture, politics, and social issues. Since then, he has initiated two more comic book series and a novel, The Water Dancer, forthcoming from Random House in September 2019. He lives in New York with his wife and son.

Ta-Nehisi Coates On Being Black in America - Interview onDemocracy Now!

The Case for Reparations, The Atlantic, June 2014

"Ta-Nehisi Coates burst into national prominence in 2014, when his lengthy essay, "The Case for Reparations," appeared in the Atlantic, where he is a national correspondent. Copiously researched and documented, the article demonstrated how African Americans have had their lives and labor systematically plundered over the nearly four centuries since the first black slaves arrived in the United States. And contrary to common belief, the plundering didn't stop when slavery ended, or even with the civil-rights laws of the 1960s. It continued--and continues--to the present, thanks to discriminatory government policies and industry practices that allow outrages like redlining, contract sales, racial steering, and other discriminatory behaviors." -- Don Wycliff, Commonweal. 142.20 (Dec. 18, 2015) p22.